Peace Through Profits? Inside The Secret Tech Ventures That Are Reshaping The Israeli-Arab-Palestinian World

Even by Middle East standards, the scene in a Dead Sea restaurant, situated within a “green zone”–a no-man’s-land claimed by neither Israelis nor Palestinians–was surreal. As a camel knelt outside, two Israeli soldiers nonchalantly sipped coffee at the counter and a score of rabbis said a prayer before their communal lunch–all oblivious to a dozen history-making Palestinians and Israelis huddled together in the back room.

“So the safety guard should be put at the whole project rather than the task,” said a Palestinian. “Exactly,” answered an Israeli Jew, who added: “Also, should the buffer be hidden or public? What do you think?” A second Palestinian spoke up: “Who’s gonna hide it?” The room broke into laughter. Yet another Palestinian, oblivious to an abstract painting of the Star of David behind him, asked: “Do you want the truth, or do you want the truth plus protection?”

With official relations between Palestinians and Israelis still poisonous after a century of conflict, any constructive dialogue is newsworthy. But these aren’t security forces talking about joint military patrols, nor is this discussion connected to the sudden resumption of peace talks after a three-year stalemate. The group, brought together by Cisco Systems, is speaking their common language: tech management. Nearly 100 times over the past two years Israeli high-tech experts and Palestinian entrepreneurs have gotten together in the hope of making Israel’s “Startup Nation” economic miracle a cross-border affair. And it’s just one of dozens of business-driven dialogues quietly–in many cases secretly–proliferating across the Holy Land.

“The way to end this conflict is to create a very large middle class and be inclusive in how you go after it across all individuals, regardless of age, religion or gender,” says John Chambers, CEO of Cisco, the most actively involved American tech executive in a coordinated effort that includes de facto diplomats from the likes of Intel, Hewlett-Packard and Microsoft. “If you can address those issues and you can get others involved, then you can have a shot at peace in the Middle East.”

Of course, there’s already billions of dollars’ worth of trade flowing between the West Bank and Israel, given their proximity and the latter’s border control over the former. Even in Gaza, whose leaders have a stated goal of destroying the Jewish state, commerce furtively passes back and forth on a massive scale. April’s Dead Sea meeting, however, represents something much more far-reaching and rarely discussed. Rather than just trading goods, hundreds of Israeli and Palestinians are becoming actual business partners and colleagues in startups that are slowly transforming the Palestinian economy, at least in the West Bank.

It’s not easy. Over the course of reporting this story FORBES interviewed scores of high-tech leaders on both sides of the border. Nearly all expressed fears and worries over how their comments would be perceived. (Many insisted on full anonymity; FORBES was granted access to the Dead Sea training session only on the condition that we keep its exact location a secret.) On the Palestinian side a large contingent myopically equates any collaboration with treachery, even if it strengthens the local economy (and especially if it’s perceived to strengthen Israel’s). While most in the Jewish state would view these partnerships positively, a sizable minority fear that Palestinians armed with the skills and technology that have driven Israel’s prosperity would use them against Israel in a future war.

Yet for all the mutual suspicion, collaborate they do. Buoyed by training, investment or partnerships from Israelis or Israeli subsidiaries of American companies, more than 300 Palestinian technology firms now employ 4,500 people, FORBES estimates, up from just 23 firms in the six-year period leading up to 2000. More are on the way: There’s at least $100 million in venture cash from Israeli or Western sources either looking for deals or recently put to work in Palestinian or Israeli Arab startups (with the latter community, representing one-fifth of the country’s citizenry, increasingly agitating to get in on the action). Meanwhile, Chambers and his peers at U.S. technology giants have pushed their Israeli subsidiaries to outsource research and development projects to Palestinian startups or to hire local Arabs.

This is the real backdrop for the renewed peace talks lurching forward under the aegis of U.S. Secretary of State John Kerry. Feckless politicians will invariably look to blame the other side for inaction. The private sector’s detente is delivering results right now, with the intention of creating enough interconnected prosperity to make a lasting peace in everyone’s economic self-interest.

Ramallah, the business capital of the West Bank, is just 20 minutes from Jerusalem. On paper. A group of Palestinian CEOs from the disputed, eastern part of Jerusalem had agreed to meet FORBES for dinner in Ramallah but had to cancel. The checkpoint between the two had been closed by the Israeli military, who were grappling with 50 rock-throwing, tire-burning Palestinians. 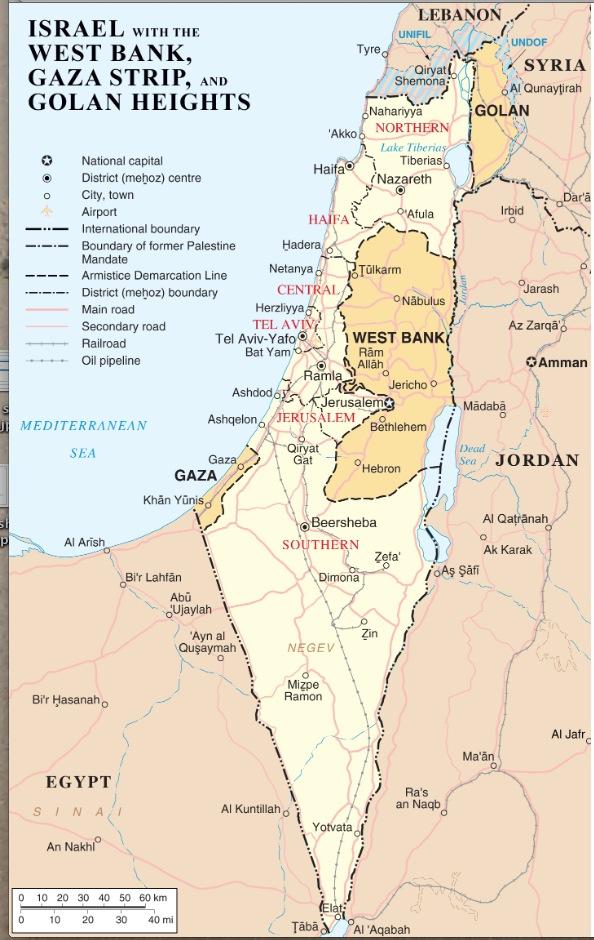 Such are the difficulties of doing business in Ramallah, which has emerged as the West Bank’s tech hub. But the dinner date also demonstrates the city’s vibrancy: With just three phone calls and an hour’s notice, a different group of locally based tech CEOs shows up in their place. We dine at a Mexican restaurant called Fuego, one of dozens of trendy spots in the city where twentysomething Palestinians sip cocktails, their laptops open, their smartphones on–a scene indistinguishable from one in Austin or San Francisco.

Tareq Maayah, founder of Ramallah-based Exalt Technologies, whose 90 employees handle software development for the likes of Cisco Israel, is about to strike a lucrative partnership with another major U.S. affiliate in Israel. But as Pitbull’s “Give Me Everything” blares, he is more eager to talk about a nearby startup he’s backing, ShopZooky, which aggregates local Facebook merchant content–such as offers, posts, news and local store information–into one mobile application.

To his right Husni Abu Samrah begins to discuss an app that his company, MobiStine, has designed (it will wake up pregnant women who are sleeping in a position that could be risky to their health or to the health of the fetus), but then he’s interrupted by a text. His face lights up.

“My son is 14. I gave him a MacBook and told him ‘Why don’t you learn iPhone development instead of wasting your time on Facebook?,’ ” Abu Samrah explains. ‘He said, ‘Okay, give me the Mac.’ ” The text was to let Dad know that Apple had just approved his first app, GamesDifferent, a 20-level brainteaser, for the Apple Store.

Such layers of entrepreneurship are a manifestation of both ambition and sheer numbers. Ten different colleges on the West Bank churn out 2,000 engineering and computer graduates a year, while the tech sector employs 4,500 in total, forcing many abroad but creating entrepreneurs, of necessity, out of thousands more. Ramallah recently hosted a weekend-long startup competition that included such entries as online psychiatric services for religious Arab women unable to get out of their houses.

Who’s in charge matters. Most of the 300 Palestinian tech firms are situated near Ramallah. Gaza, run by Hamas, with virtually no mobility possible to or from Israel, has no significant entrepreneurial activity in the tech field. One Palestinian tech consultant estimates that there about 3,000 freelance coders there. “Somehow they scratch out a living,” he says.

Not that the West Bank has it easy. The blockades are a huge hassle, though most Ramallah entrepreneurs complain more about the advantage it gives to their Israeli competitors than about any personal inconveniences. In fact, the biggest gripe is about a different kind of blockade: the lack of high-speed mobile, which Israel withholds for unstated security reasons. When the U.S. President visited Israel in March, he was greeted with placards: “Obama don’t bring your smartphone. We have no 3G.”

This dynamic creates a quandary for Palestinians eager to succeed. How to accept help and money from Israel’s tech and business communities, when the politicians and army are seen as occupiers? “There is strong sentiment that anything you do today with Israelis that does not involve an attempt or a process that is targeted towards the political side of the conflict resolution is viewed as normalization, which is really kind of the taboo word,” says Saed Nashef, who left a top job at Microsoft to become an entrepreneur before cofounding Sadara Ventures, the first venture fund in the Palestinian territories. “And for good reasons, too.”

That’s a tricky position for Nashef, since he’s the go-to person on the West Bank for venture money and by this definition a normalizer, since his partner is a Jew, Yadin Kaufmann, a pioneering investor in the Israeli high-tech industry. Together they’ve raised almost $30 million, from 24 investors, including the foundations or personal accounts of billionaires George Soros, Steve Case and Jeff Skoll, as well as Cisco and the European Investment Bank. (Tellingly, the other 19 won’t allow their names to be known, although Nashef says they’re neither Israeli nor Palestinian.)

“A lot of people understand the difference between what we are doing and normalization,” says Nashef, as we sit in Ramallah’s Movenpick Hotel. “But there are others who won’t work with us.” He learned that the hard way last year when he was disinvited to speak about building startups at one of the West Bank’s top universities, Birzeit.

“So I’m no longer welcome at Birzeit because I’m seen as a promoter of normalization,” he laughs. “It doesn’t upset me. The only thing I feel bad about is it’s a lost opportunity for the students to benefit from the know-how and exposure I have to offer them.” While he doesn’t “credit or discredit” armed struggle, Nashef says that for him, “there is more than one form of resistance. And one way is to be stronger economically.” 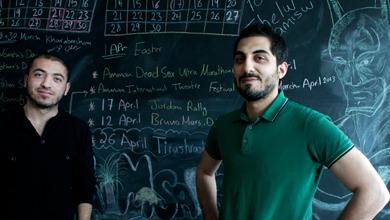 Faris Zaher (right) launched YamSafer in Ramallah with Seri Abdelhadi (left), with the idea of streamlining hotel room purchasing in the Arab world. The mood in his city? “People have been suppressed for a long time. So everybody’s intense.”

Nonetheless, since closing the round in 2011, Sadara has made two investments, including YamSafer, an Arabic version of Hotels.com. YamSafer’s offices are colorful and resemble a modern loft in New York’s Tribeca, as its 12 employees punch out software and book travel. They service 22 Arab countries, and just added Turkey.

Asked if he has any problem that the firm that funded him is partly run by an Israeli, YamSafer’s 26-year-old CEO, Faris Zaher, argues that it’s irrelevant yet acknowledges that they don’t broadcast that fact: “There’s a very clear difference between having someone on board who has an added value who happens to be an Israeli human being than taking Israeli money directly from, like, an organization that is somehow affiliated politically.”

Such pragmatism will pay dividends. Paperin says that Sadara ideally would have raised far more capital but that the nascent Palestinian market can’t currently absorb it. “There’s just not that much of a corpus there,” he says. But those who embrace the concept of fighting through economic success, rather than through the military, will be rewarded. “Once they’ve got a couple investments on the boards, what I’ve suggested to my colleagues is we help them go out and market again for more money.”